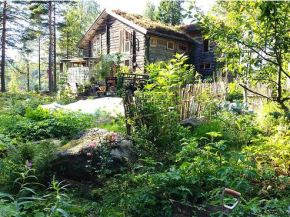 At eleven, you have already traveled extensively: Tahoe, New York, London, Spain, Hawaii, Iceland.   This summer we visited friends who live in the woods on the outskirts of Oslo.  The home in all its bohemian rhapsody could not be more different from your mom’s paean to sophisticated modern luxury back home in the city. Here, the bare wood face of the house is crowned with a thatch roof where grasses, daisies, seedling trees and ferns wave to and fro in the cool breezes.   It lends this house a fairy tale air, with its weathered boards and mossy statues hidden among the wild blueberry thickets that blanket the back yard. 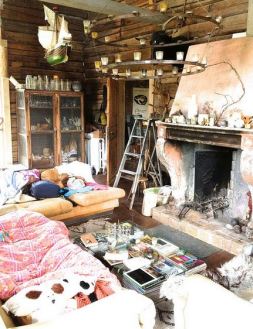 Inside the house are piled, stacked and propped everywhere towers and troves of books, oddities, treasures and antiques from the family’s travels across Europe.  Your bed for the week is a wide-bodied, elderly leather couch (Spanish) laid with an actual wolf skin (Norwegian) in front of a great ancient stone (French) fireplace where you take great delight in stoking a roaring fire each night.  Your dad and I sleep above you in a crow’s nest of a room with one wall composed entirely of a mélange of antique windows, where we drift to sleep in the flickering orange-and shadow glow of your pyrotechnics.

Although your young life includes the luck of luxury, you’ve always been a camper at heart.  By age four you were a veteran of tenting in the wilds of the backyard deck, your preferred venue for popcorn and movies. Your dad and I would creep upstairs to sleep on a bed vs. boards for a few hours, then creep back down before you woke.  I was certain you never knew, because if you woke up in the wee hours alone in the dark in the backyard like that, we’d surely hear it  through the crackling sentinel of the baby monitor.

But the baby monitor emitted only the soft sounds of your breathing, and we congratulated each other on our stealth, only to have you much later remark casually over your Cheerios, “You guys sure were gone a long time.”    We laughed and I asked you why you didn’t come up and join us in bed. “Because we were camping,” you say, with perfect comfort-is-for sissies disdain.

Since then you’ve camped in all manner of places – from beside the Blackwood Canyon creek in Tahoe, to the remote lakes alongside the rugged mountain biking trails of Downieville.  You’ve camped in Idaho, Nevada and California.   But it is here in Norway, that your jones for camping is finally, fully satisfied: outdoor life is not so much a respite from daily life as a part of it.

Our first day you are charmed to take part in a Norwegian custom of a breakfast barbeque right on the windy beach, the sound of the water lapping counterpoint to the crackling fire.  We make pancakes in a cast iron pan, the batter thick with blueberries we’ve picked from the  back yard that same morning.  You even sip the coffee percolated over the fire in a bialetti well-darkened with age.  Afterwards we swim in the fjord water, its icy sharpness snatching our breath away. 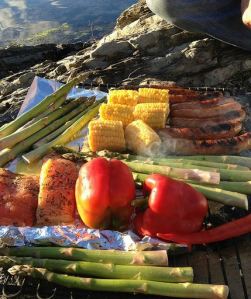 It is the first of many meals on the beach, the wind sending the smoke after first one, then another of us, as we gather around the grill propped between rocks with its bounty of mackerel, salmon, peppers, and asparagus spears laid out like soldiers on the grill

The people of this house are as lovely and unique as the surroundings; we both agree that Ingvild, with her slim limbs and long, wild curly mane looks just like a mermaid. It seems almost impossible that she is the mother of four, ranging from age 8 to 20.  The boys have the famous Norwegian tow-headed beauty of the crown princess herself, the girls  with  the same thick flowing locks of their mother are sun-and-moon beautiful, one blonde, one dark.

Theirs is not a lifestyle but a life lived in natural full; the garden is an abundance of greens, herbs and edible flowers which find their way to our dinner table each night. The soaps are handmade, the jams are home-canned, and the great porcelain bowls of eggs laid at nearby neighbors’ farms.

Everything here doesn’t just look old, it is; from the metal café chairs (Greek) with the pillows softening the seats (Turkey)and the leather poufs (Moroccan) and the wooden steps that creak with Grimmish maleficence at night, the entire house is painted in a patina of time.

The bathtub is a century old; our host asserts that indeed, his wife can float within its depths, news at which you and I exchange a secret mermaid glance.

At night, the rushing Norwegian wind slithers through the cracks between the reclaimed wood walls with a hiss that makes you shiver with the ghost of winter’s past, even in the midst of midsummer, and sleeping by the leaping light of a fire I find, as you seem to, a comfort that is about more than mere warmth.

Another day finds us on another beach, where we perch on rocks above the fjord waters and eat fresh caught shrimp Norwegian style: open faced sandwiches with mayonnaise and just-picked dill, plus a squeeze lemon .   Shrimp are of the few foods you’ve never cared for, but you cheerfully twist off pink shrimp heads and tails into a pile for the seagulls to squabble over. 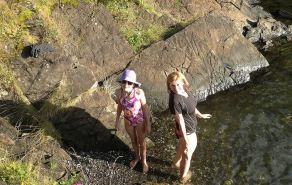 e into the fjord like old pros; the water is a touch less icy here, protected as it is from the wind.  The water is clear and we can see straight to the bottom to the blue mussel shells piled amongst great moss-carpeted stones, where the white and purple starfish pulsing gently with the lapping waves are almost unremarkable in their expected magic.

Your entry into seventh grade has augured many new developments, including (what seems like overnight) an extra twelve inches (all in your legs!) and a transition in sports focus,  from soccer  to cross country.  I am thrilled to see you embrace running, which you have a natural gift for.  I made the same transition at about the same age, and nearly forty years later I’m still running and even sometimes winning, which is not lost on you or your quiet competitive intensity. 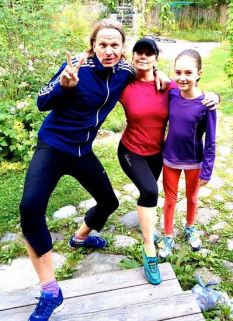 You run with a deceptive long-legged diffidence, whether the terrain is through city streets or mountains, and the Norwegian woods are no different.   Only a half mile from the house and we are running a single track deep under the dripping tree canopy, you bouncing along ahead, our feet thumping across the mossy, rocky, root-strewn trail.   Your improbably long legs cover the ground in a skipping lope that looks as aimless and effortless as a dragonfly –  an elegant deception that utterly  belies your actual speed,  which is as sure  as it is startling.  Though you never seem to even breathe hard, you are the fastest in your grade, not just among the girls but the boys too.

How far was that, you ask me afterwards, and marvel when I estimate four miles, and how the miles passed almost unnoticed.  We agree that trail running with its elevation climbs and steep descents, is nonetheless easier than track running, where the simple brutal monotonous measure of the distance confronts the runner at each step.  Already you run with the heart (and the frantic hamster wheeling mind) of a true champion.

Later we revisit the same path, this time hunting mushrooms for the evening’s meal, a sopprisotto.  We venture well off the rocky single track trail we had pounded down earlier.  Off the trail the landscape is rocky and unforgiving, boulders poking up through the thin forest soil like the humped backs of buried brontosaurs.  Our shoes and pant legs are immediately soaked in the long grasses and fiddlehead ferns still heavy with the morning’s rain.  The tree branches form a canopy overhead that drip drip drips all around us.

We find pale mushrooms and dark, small in crowds and huge and craggy loners, speculating if the ugly ones were more likely to be poisonous. We  hold out our finds to our Norwegian mermaid, who has two bags: one for mushrooms she recognizes, one for the mushrooms she’ll look up in her book back home.  You ask why they need to be separate and I tell you about the movie The Beguiled, starring poison mushrooms as the murder weapon of choice by a little girl who doesn’t want her sister to run off and marry Clint Eastwood’s Union Soldier.   You are respectful of the power of a mere vegetable, and your dislike of mushrooms is shiveringly reinforced.

The sopprisotto turns out well.   Norwegians in general are deadly serious about their coffee, and these Norwegians of ours with all their world travels are particularly deadly serious about their wine, so our sopprisotto with garden salad and roasted root vegetables – a meal we’ve assembled almost entirely from the backyard and surrounding woods –  is paired with a biodynamic wine (Argentina) poured from a fragile-looking  decanter (France)

Another day we visit a park crowded with the sculpture of Vigeland; the sculptures themselves are crowded with humanity, a tangle of arms and legs and heads tumbling together in great groaning groups and tortured spires. We try but do not find the sculpture of a monster eating children, one in his mouth, three more screaming in his arms.   We laugh at the idea of such a sculpture appearing in any American park, ever.

A seven day vacation seemed like an eternity when it starts, but the day of leaving finally arrives.  The rains have finally cleared  and in the early morning light the sky is scalloped with salmon clouds.  The stone fountain with its silent watching angel tinkles goodbye, the lily pads in the pond undulate gently, the daisies nod at us from the roof.

Hugs are given all around and you inform you love Norway,  Typically (ever the Bridge)  you decline to list a favorite thing about it – there were too many, you say, though you quickly add “blueberry pancakes on an open fire at the beach” at the exact moment I imagine you in that same scene, bending delightedly over a cast iron pan, your hair whipping across your forehead, your rain-spattered face lit with a smile. 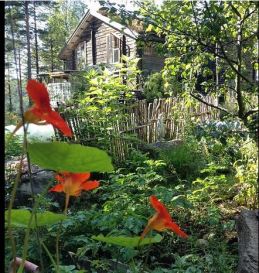 Winding down toward the train station we note that only a few of the traditional thatch roofs can be seen – red metal seems all the rage these days. We discuss how roofs are the perfect place, really, for daisies. Your favorite flower would always be there, you say, and wouldn’t that be nice?  And I agree, having one’s favorite flower growing constantly overhead would be a fate I’d wish on anyone.  As we start our long journey home I picture it for a moment, every roof across the world dotted with daisies, a scene to rival the star-spread sky.

and by my tweets ye shall know me